Avian Amplification of Arboviruses: The Key to Epidemic Transmission

Fortunately, human arboviral epidemics are relatively rare. This is because the conditions conducive for the production of large numbers of infected vector mosquitoes are themselves rare. In Florida, the arboviral transmission season is divided into 4 equal parts (Table 1) (see, Day and Curtis, 1999, Blood feeding and oviposition by Culex nigripalpus (Diptera: Culicidae) before, during, and after a widespread St. Louis encephalitis virus epidemic in Florida, Journal of Medical Entomology, 36:176-181 for a complete review). The Maintenance Phase (January - March is when arboviruses survive the winter in north Florida and the dry season in south Florida. It is difficult to document virus transmission or isolate virus during the Maintenance Phase. The Amplification Phase (April--June) corresponds with a major portion of the avian nesting season in Florida. During this period mosquitoes and non-immune nestling birds come into contact and initiate the first rounds of avian and mosquito infections. This is called "arboviral amplification."

The Early Epidemic Phase (July--September), is the hot, wet, humid period that includes the worst of the Atlantic hurricane season. During this phase arboviral transmission increases dramatically, human cases appear, and arboviral transmission to humans rapidly increases with epidemics usually peaking in late September. Finally, during the Late Epidemic Phase (October--December) the number of new human cases gradually declines as epidemics burn themselves out. During many years, few if any human cases are reported. Of the four phases, the Amplification Phase is the most important in determining the relative risk of human infection and the intensity of an arboviral epidemic later in the year.

Full-blown arboviral epidemics require large numbers of infected mosquitoes. St. Louis encephalitis epidemics in Florida have typically reported mosquito infection rates ranging from 1:1,000 to 1:200. To realize mosquito infection rates of this magnitude, extremely efficient viral amplification must occur between local avian populations and vector mosquitoes. As noted above, the Amplification Phase in Florida corresponds with the avian nesting season. This is particularly important because nestling birds provide a relatively easy source of blood for infected mosquitoes and also provide a large population of non-immune birds that can efficiently amplify virus. 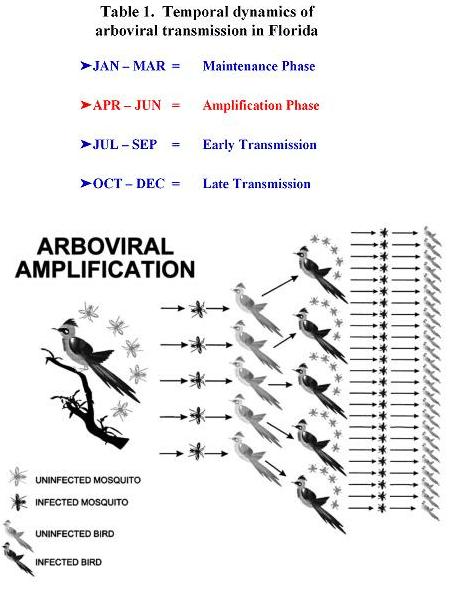 Epidemic arboviral amplification requires more than just an unusually productive avian nesting season. Large numbers of adult birds also need to be non-immune. Once a bird is infected with an arbovirus and survives, that bird is immune to re-infection for life. If, for example, 75% of the birds in a population have been infected with an arbovirus and are immune, then 3 out of 4 mosquito blood meals are wasted relative to arboviral amplification. Infective mosquitoes feeding on immune birds do not re-infect that bird. Likewise, uninfected mosquitoes feeding on previously infected immune birds do not become infected. In order to have efficient amplification, a large population of non-immune birds must encounter infective vectors. When this happens in the presence of increasing vector populations, explosive amplification as depicted in the cartoon below will occur.

The most important factors contributing to explosive arboviral amplification are: 1) an extensive source of non-immune wild birds and 2) a steady supply of infective vector mosquitoes. There are 3 major sources of birds in Florida. 1) Exotics birds that are imported into the state and include pets, zoo animals, breeding animals in colonies, and birds used as agricultural commodities. 2) Wild migrants that pass through or take up temporary residence in Florida during autumn and spring migrations to and from wintering grounds in the Caribbean and Central and South America. 3) Resident birds that remain in the state throughout the year.

Exotic birds probably play only a minor role in arboviral amplification, mainly because they are so focal and patchy in their distribution. For example, flamingos and parrots are maintained in large numbers in zoos, breeding farms, and theme parks. These populations have very patchy distributions. Exotics such as emus and ostriches are occasionally imported for use in the agricultural industry and may be present in large numbers at very focal locations. Although exotic birds may cause a focal outbreak of arboviral transmission, they are not likely responsible for the amplification necessary to cause a large human epidemic simply because of their patchy geographical distribution.

Huge numbers of migrant birds pass through, or overwinter, in Florida. Obligate insectivores, such as swifts and swallows, pass through Florida during southward migrations starting in August. Other migrant species follow, with the peak autumn migration occurring in Florida between September and October. This places large numbers of migrant birds in Florida during the Early and Late Transmission phases of the Florida arboviral transmission cycle. The nonimmune portions of these migrant populations thus have the potential of adding to epidemic amplification in Florida. During spring migration birds move through Florida heading north between February and May with peak activity in March and April. This places spring migrants in the state during the Florida dry season, when mosquitoes are relatively rare. It is unlikely that the spring migrants contribute significantly to arboviral amplification that will result in epidemic transmission later in July - September.

Resident avian populations are therefore the most likely source for the arboviral amplification observed during epidemic years. Resident populations can be divided into those that are rare, focal, or widespread. Rare birds, such as pileated woodpeckers, may become infected and, in turn, infect vector mosquitoes. However, because these birds are rare and very patchy in their distribution, it is unlikely that they are responsible for infecting large numbers of vector mosquitoes. Likewise, some avian populations are extremely focal in their distribution. For example, common grackles are focally distributed geographically and temporally. Common grackle populations are also very cyclic. During some years these birds are extremely abundant and produce huge numbers of offspring. The populations usually build slowly, peak over a 2 - 3 year period and then crash. During peak population years common grackles can be found nearly everywhere, but they are especially abundant around dumpsters associated with fast-food restaurants and grocery stores. Finally, some avian populations are widely distributed both geographically and temporally. Species like mourning doves, blue jays, northern mockingbirds, and northern cardinals are found in large numbers in virtually every Florida habitat, especially suburban residential neighborhoods. Because these 4 avian species are so widely distributed, they can efficiently amplify arboviruses over a large geographic area.

Between 1989 and 1997 we monitored wild avian populations in Indian River County, Florida for antibody to St. Louis encephalitis (SLE) virus. This 9 year period included the large SLE epidemic in 1990. Details of this study can be found elsewhere (Day and Stark, 1999, Avian serology in a St. Louis encephalitis epicenter before, during, and after a widespread epidemic in South Florida, USA, J. Medical Entomology, 36:614-633). The study showed that avian infection with SLE virus is relatively rare during inter-epidemic periods. Approximately 1% of the sampled birds were positive for SLE antibody during the non-epidemic years included in the sample period. In contrast, during the autumn of the 1990 SLE epidemic, virtually all of the birds that were captured and bled had SLE antibody, indicating that epidemic amplification was explosive and widespread prior to, and coincident with, the onset of human SLE cases in Indian River County. A second observation made during this study was that common grackles and mourning doves had remarkable breeding seasons during 1990 (the epidemic year), 1991, and 1992. I proposed (Day, 2001, Predicting St. Louis encephalitis virus epidemics: Lessons from recent, and not so recent, outbreaks, Annual Review of Entomology, 46:111-138) that a severe winter freeze during Christmas of 1989 killed cold-sensitive ground vegetation in hammocks throughout south Florida and opened these habitats to ground feeding birds such as mourning doves and common grackles. This increased foraging and nesting sites for these species and resulted in increased breeding success during the 3 nesting seasons following the freeze. The spring and summer of 1990 produced a remarkable amplification event for SLE virus in south Florida resulting in an extensive, widespread SLE epidemic from late July through the end of the year.

Since its introduction into Florida in 2001, there has yet to be a significant epidemic of West Nile (WN) virus recorded in the state. Because WN is closely related to SLE, it is likely that WN epidemiology, including avian amplification, will be similar to that of SLE. It is evident that the conditions for significant levels of WN amplification have not yet been present in Florida. When these conditions prevail, watch out. Florida can be expected to record epidemic transmission levels that eclipse what has been previously reported elsewhere in the U. S.