Chikungunya in Florida: The tip of the iceberg

As of July 30, 2014 there have been 107 reported Florida chikungunya cases representing about 37% of all the cases reported so far in the U. S. for 2014. All but four of Florida's are imported cases. These are people who recently traveled to areas like the Caribbean Basin, where there is an ongoing epidemic of chikungunya and the likely place where they were infected. Only 4 cases in the entire U. S., all in Florida, have been attributed to being infected in the U. S. All 4 presented with chikungunya in people with no recent travel outside Florida. These 4 were infected in Florida by Florida mosquitoes, likely Aedes aegypti.

The first Florida autochthonous case was a 41 year old Miami-Dade County woman with onset of symptoms on June 10, 2014. The second case was a 50 year old Palm Beach County man with onset of symptoms on July 1, 2014. On July 30, a chikungunya case in St. Lucie County, a 56 year old woman, with no recent travel history and a second case in a 48 year old male, symptom onset on July17, also with no history of travel in Florida, were announced. St. Lucie County Mosquito Control initiated house-to-house inspections with control spraying for adult mosquitoes and dumping water containers on local properties in the area of their case for source reduction. The local newspaper announced this case with no mention that the public needed to take precautions, most particularly by discarding all water holding containers on their properties. Palm Beach Mosquito Control has been conducting similar responses since their first case and will continue for their 2nd reported case.

With roughly 500,000 chikungunya cases in the Caribbean Basin region as of July 31, more than 100 imported cases in Florida, and documentation of at least 4 Florida transmission events, Florida has been extremely fortunate to not have already seen more cases. Have we just been lucky so far? Will Florida's luck hold?

The causes(s) for the lack of more transmission of chikungunya virus (CHIKV) in Florida may never be known with assurance. One cause might be that the imported cases so far are in areas where the vector populations are absent or too low to support transmission. I conducted an informal poll of the mosquito control districts in all Florida's counties that have reported an imported chikungunya case. The response was excellent and I received information from about ¾ of the mosquito control directors from these counties. The bad news was almost unanimous agreement that the locations of the imported cases, their places of residence, were almost all in areas of their district where there were Aedes aegypti. Some reported Aedes albopictus, but for the south Florida counties clearly Ae. aegypti were present and in noticeable numbers. My informal poll did not support the contention that Florida has escaped a chikungunya epidemic because imported cases were in areas with few Ae. aegypti or Ae. albopictus.

Chikungunya is not yet a notifiable disease in the U. S. though this may change. Since physicians are not required to report chikungunya cases there likely have been other Florida cases, some also due to infectious Florida mosquitoes. I am personally aware of 3 such cases. Coincidentally an acquaintance advised me of his two relatives in Palm Beach County who were told by their physician that they each had chikungunya based on his diagnosis of their symptoms. Neither was tested for CHIKV and neither case reported to the Health Department. On Wednesday, July 23, 2014, I received a call from a man residing in West Palm Beach. His wife had become quite sick on Saturday, July 20, 2014, with high fever, headache and severe pain largely in her wrist, back and ankles. Her physician told her she had chikungunya and advised she go home, rest, take Tylenol and that the symptoms should subside in a few days. His wife had not traveled anywhere outside of West Palm Beach in the past several weeks. I do not know if this woman is the 2nd Palm Beach County case described above but since the onset dates are different I suspect so are the cases.

Is it likely that there have been other unreported chikungunya cases due to transmission right here in Florida? Have we seen only the tip of the iceberg? We know the danger of not seeing the whole iceberg (Figure 1). Fighting chikungunya is dependent on quickly identifying where there are substantial populations of Ae. aegypti and Ae. albopictus, reducing those populations, quickly identifying where there are cases of chikungunya

Consider the first two Florida autochthonous cases. One had onset of symptoms on June 10, the other 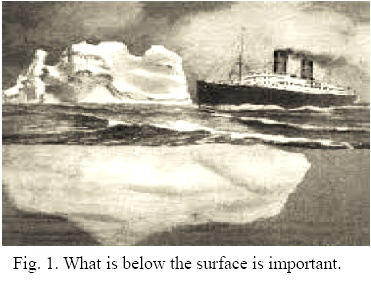 on July 1. Notifications of the cases were provided to the local mosquito control in late July. Since chikungunya symptoms generally occur 3-7 days after being bitten by an infected mosquito, the actual transmission events were around June 3-June 7, and June 24-June 28. The incubation period for CHIKV in the mosquito is as short as 1-3 days to 12 days. Assuming the shorter incubation, there were infected vectors in the two areas starting around June 1 and June 21, respectively, if not earlier. Mosquito control did not initiate any control measures until late-July, several weeks after the likely appearance of infected mosquitoes. Is it likely that mosquito control can be effective in stopping further transmission by killing any adult infected vectors still in the vicinity? Surely more timely response is essential. If source reduction efforts were 100% effective in the above two cases the effect would likely only be noticed at best in a decrease in subsequent newly emerging Ae. aegypti or Ae. albopictus in the respective local areas with perhaps some reduction in transmission over the following several weeks. However such efforts would not have any immediate impact on transmission and new cases would continue to come forward. And this is with cases that have been noted. What of the unreported cases or the 3-28% of chikungunya cases that are asymptomatic and never observed though these infected people are capable of infecting mosquitoes? The challenges for effective control are daunting.

initial case or two, such as those already reported and discussed above. For example, the first Palm Beach County case was likely infected on June 3 -7 with mosquito control and the health department reacting in late-July. Let's assume the source reduction efforts were 100% effective with all water storage containers destroyed (the best outcome) or at least emptied of their water contents in the entire surrounding area as of, say, July 20. There are likely still some infected adult Ae. aegypti in the area and likely some infected people. With no follow-up and the rain conditions currently in south Florida, many of the properties in the area will quickly have water storage containers for the adult Ae. aegypti females in the area or migrating to the area from elsewhere to lay new batches of eggs. Even if there are no adult mosquitoes, emptying water from storage containers does not destroy the eggs on the walls of these containers. So unless the container was destroyed or subjected to chemicals to kill the eggs, simply dumping containers will leave containers that will produce larvae with the first rain even in the absence of adult mosquitoes. If containers are present on July 21, then 10 days later, July 31 or August 1, new Ae. aegypti begin to emerge in the area, the females start blood feeding, laying more eggs, and encountering remaining infected people and by August 4 or soon thereafter are capable of infecting more people. These new cases will begin appearing between August 7-11. Without follow-up and sustaining source reduction one might not even observe any reduction in cases due to an initial 100% effective clean up.

Many BuzzWords columns, conclusions of a recent workshop and numerous discussions among Florida's mosquito control and public health professionals have pleaded for the urgency for public to take chikungunya and dengue seriously. It is essential for all citizens to participate in source reduction for the vector species by eliminating all water containers on their properties. To date there is little indication of the primacy of this message in any reporting or public service announcements. Where are the headlines, or the lead messages in news articles about citizen source reduction to reduce the risk of chikungunya or dengue? At best this message is provided almost as an afterthought at the end of articles, no different from articles about West Nile. One might question the impact of reducing water storage containers on populations of many West Nile vector mosquito species. However, for Ae. aegypti, and in many areas for Ae. albopictus, human water storage containers are the primary larval sites and eliminating these will reduce mosquitoes around the property and local neighborhood. Where is the public outcry? Where are the headlines? For example:

PROTECT YOUR FAMILY FROM CHIKUNGUNYA: ELIMINATE ALL WATER STORAGE CONTAINERS IN YOUR NEIGHBORHOOD!

Florida cases due to transmission by Florida mosquitoes is most certainly higher than the 4 reported cases as of July 31, 2014. Recall the Ravenna Province, Italy 2007 chikungunya epidemic (Tabachnick, WJ. 2006. Florida and chikungunya: Lessons from chikungunya Italian style. BuzzWords, Newsletter of the Florida Mosquito Control Assoc. 7(6): 8-9. The first reported case in June, second case July 4, with over 300 cases by October in a population of about 3800 in the two affected villages, Castiglione de Cervia and Castiglione di Ravenna. That translates to about 1200 cases in Key West, and 111,000 cases in West Palm Beach County! Florida may be on the verge, on the edge of the cliff, at the tip of that iceberg already. Remember "it ain't over 'till it's over." (Yogi Berra). We have a long way to go this year.

Florida's responses to reported chikungunya cases are still woefully slow and unlikely to prevent an outbreak with many more cases. If we cannot improve mosquito control response time, improve case detection and reporting to mosquito control, and elicit the public in sustained source reduction for properties in their neighborhoods, then the best mosquito control in the world can only hope to shorten an epidemic once substantial numbers of cases start showing up in hospitals and doctor's offices.

In view of the substantial discussions about chikungunya and Florida over the years it would be surprising that anyone in Florida mosquito control is not already well informed about chikungunya. The following BuzzWords columns on the danger of chikungunya to Florida can be viewed in our archive.

Back to Buzz Words Archive