It is very likely that the next major challenge for Florida and Florida mosquito control programs will be a future outbreak of dengue somewhere in Florida. The experiences of Key West's efforts against the dengue outbreaks in 2009 and 2010 are sobering reminders that Aedes aegypti and dengue are difficult challenges. Despite the best efforts of the highly organized, efficient and well supported mosquito control program in Key West, Ae. aegypti transmitted dengue virus caused 22 cases in 2009 and 65 cases in 2010. These numbers represent a very high incidence of dengue among Key West's resident population of ca. 20,000. I have previously pointed out that the incidence in 2010 of ca. 325/100,000 would result in ca. 15,000 cases of dengue were it to occur in the Southeast Florida metropolitan region with a population of ca. 5 million (Tabachnick W. J. 2011. A dangerous precedent: Reducing Florida mosquito control capabilities in the face of a potential catastrophic dengue outbreak. BuzzWords 11(50): 11-13).

Florida mosquito control professionals may be interested in finding peer reviewed published information on mounting an effective anti-Ae. aegypti and hence anti-dengue campaign. PubMed, the U.S. National Library of Medicine NIH, contains citations to 21 million published articles going back to 1949. It can be accessed at http:// www.ncbi.nlm.nih.gov/pubmed/. A search containing the terms "mosquito control dengue" resulted in 1129 relevant publications. The following were selected as examples of developing effective anti-Ae. aegypti anti-dengue mosquito control. There are many other relevant papers in the PubMed list. The following papers with my brief summary provide an entry to the available literature:

Kay, B.H., T. Tran, H. Tuyet, N.H. Le, T.M. Quy, et al. 2011. Sustainability and cost of a community-based strategy against Aedes aegypti in Northern and Central Vietnam. Am J Trop Med Hyg. 2010 May; 82(5): 822–830. A community-based mosquito control program that used predacious copepods of the genus Mesocyclops as a biological control agent successfully controlled Ae. aegypti and has been sustainable in Vietnam for 7 years at a cost of 0.28–0.89 international dollars per person.

Morrison, A.C., E. Zielinski, T.W. Scott, R. Rosenberg. 2008. Defining challenges and proposing solutions for control of the virus vector Aedes aegypti. PloS Med 5930: e68.doi: 10.1371/journal.pmed.0050068 . First rate excellent discussion on the need for community involvement in a sustainable anti-Ae. aegypti campaign with conclusion that sustained leadership and measures that are attractive to the community are essential.

In 1901 William Gorgas (Figure 1) led an anti-Ae. aegypti campaign in Havana, Cuba that successfully reduced yellow fever transmission. Table 1 shows the actual yellow fever cases and the reduction in 1901. An 1899 census lists Havana's population at 235,981 (The Daily News Almanac and Book of Facts for 1902. Chicago Daily News Company). It is apparent that the incidence of yellow fever cases was substantially less than the incidence of dengue in Key West in 2010! Gorgas' program continued to reduce 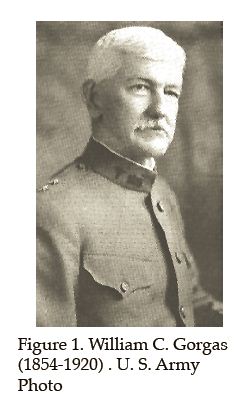 Ae. aegypti and yellow fever for many years. Will we do as well should dengue reappear in Florida? The Gorgas led campaign, supported by military resources, relied on sanitary measures that reduced Ae. aegypti larval habitats throughout the city. Figure 2 is a map of Havana in 1901, the picture of a large vibrant tropical city. Figure 3 shows a fumigation squad sealing a yellow fever victim's house with paper prior to fumigating it with burned pyrethrum. This practice was used as part of Gorgas' program to kill potentially infected mosquitoes. Perhaps other sanitary measures are needed.

It is essential that mosquito control and public health professionals recognize that Ae. aegypti and dengue control is a different challenge from how one might approach Florida's species of Culex and West Nile and St. Louis encephalitis viruses. It is essential for each Florida mosquito control and public health leader to recognize: 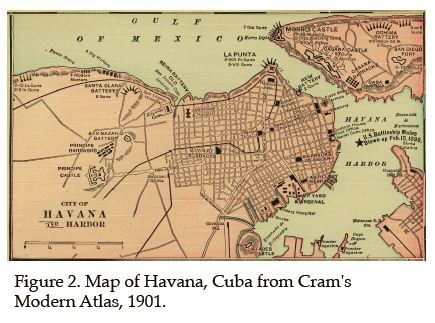 Now is the time for each Florida mosquito control district to have a plan of action. What is your anti-Ae. aegypti or anti- Aedes albopictus program? How will you enlist public participation in an anti-Aedes anti-dengue campaign? Where is your William Gorgas? 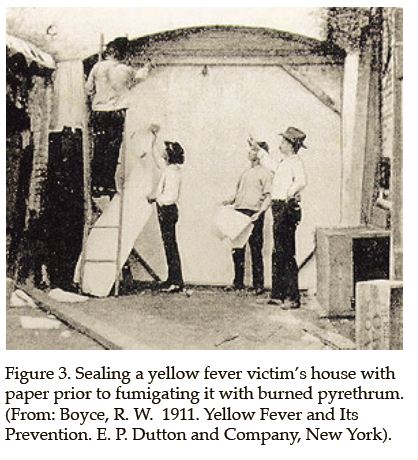