In several previous Buzzwords columns we have discussed the importance of collecting information about the frequency of mosquitoes in an area that are actually transmitting West Nile virus (WN). All surveillance tools, whether dead bird reports, mosquito infection rates, wild bird sero-surveys or sentinel chicken surveillance are estimates of this one important parameter. A mosquito transmission frequency of 1/1,000 (one mosquito transmitting WN for every 1,000 taking a blood meal) is a 10 fold greater risk than rates of 1/10,000.

In previous columns we discussed how one can use sentinel chicken surveillance information to obtain crude estimates of mosquito transmission and then use this information to estimate the actual risk for local human cases of WN. Once one has an estimate of the mosquito transmission frequency, human risk follows purely from the numbers of biting mosquitoes averaged per human and the size of the at-risk population.

Mosquito control operations and responses to impending WN epidemics will depend on having critical information for making the appropriate decisions. Mosquito control districts must prepare now to be ready to obtain needed information, particularly in areas where their routine surveillance methods indicate WN transmission. Previously we have discussed the need to discriminate areas where mosquito transmission jumps from 1/10,000 to extremely high frequencies of 1/1000 or higher. This information can be readily obtained by placing Arbovirus Rapid Deployment System (ARDS) traps in select locations.

A description of the ARDS traps and methods can be found elsewhere (Rutledge, CR, et al. 2003. West Nile virus infection rates in Cx. nigripalpus do not reflect transmission rates in Florida. J. Med. Entomol. 40: 253-258). The figure below shows the ARDS trap, or lard can trap, containing a single exposed sentinel chicken. The trap is capable of collecting all of the mosquitoes biting that chicken during the exposure period.

We advise that each mosquito control district have 5-10 such traps constructed and ready for use during the present Florida WN transmission season. If there is suspicion of significant WN transmission in an area of your district, then it would be advisable to place a trap or two in these locations for one or two evenings. Monitor the numbers and species of mosquitoes biting the birds, observe seroconversions or viremia in the birds, and obtain the mosquito transmission frequency. Place traps out on different nights and in different locations. We guarantee that there will be a time when you will need to know the mosquito transmission frequency with some assurance. We have to prepare now for the 2005 Florida WN season. It is prudent to have the ARDS traps ready and to have plans in hand for using them to obtain essential information for mosquito control operational decisions to protect the public health and well being. 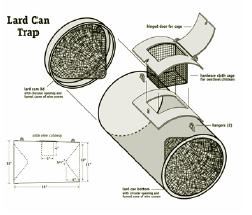