Florida's Future is at Stake: The Status of the Florida Mosquito Control Research Program

Nearly 60 years ago, two prescient public health professionals, Drs. John Mulrennan, Sr. and Maurice Provost, both giants in the history of Florida mosquito control, fought for a laboratory dedicated to provide essential new information that they believed was essential to providing effective mosquito control in Florida. They were successful in obtaining state funding to create, and recurring funds to sustain, the Entomology Research Center that later became the University of Florida, Florida Medical Entomology Laboratory (FMEL) in Vero Beach. In 1964, what later became the John Mulrennan, Sr. Public Health Research and Education Center (PHEREC) was created by moving the pesticide section from the Vero Beach Laboratory to Panama City. This later became a unit in Florida A&M University. These two dedicated State research laboratories have been the principal providers of new technologies, new strategies, and basic information on Florida's nuisance and pest mosquitoes that have kept Florida mosquito control at the forefront of protecting Florida's citizens, visitors, and its economy.

2011 will be remembered as a defining moment for Florida mosquito control. What would Drs. Mulrennan and Provost have thought about the substantial reductions in the Florida 2011 budget that singled out and cut essential aspects of mosquito control? The Florida state aid to mosquito control program was reduced 40% from $2.16 million to $1.29 million. The PHEREC laboratory was closed by Florida A&M University. In the final moments of the 2011 Florida legislative cycle, Gov. Scott prevented keeping PHEREC open for an additional year by vetoing $500,000 in non-recurring funds that had been inserted into the state budget. There is simply no good news to offer that would mitigate the devastating statement that Florida made in 2011 and the potential impact of these draconian legislative decisions. How can one quantify the loss of future opportunities to make progress and improvements in Florida mosquito control? There will be future problems for which we will not have solutions, there will be lost opportunities to make mosquito control more effective, efficient, and environmentally proper. What might Drs. Mulrennan and Provost think? I believe they would recognize that, for the first time since Florida began its war with mosquitoes and mosquito-borne disease, Florida has decided to reduce its capability to fight this war. Florida is now moving in the wrong direction. This is not only sad; it is an irresponsible act that may impact the health and well-being of Florida residents and visitors for years to come.

The loss of the PHEREC laboratory severely reduces the number of Florida scientists dedicated to mosquito control issues. In 2007 there were 6 PHEREC and 10 FMEL faculty working on important questions in support of Florida Mosquito Control. Now there are only 8 FMEL faculty due to the budget reductions that have occurred at FMEL similar to other state-supported units. However, this is a total loss of 50% of Florida's statewide capability in scientists dedicated to mosquito control issues. Yes, there are other Florida scientists who may conduct research on mosquitoes and mosquito-borne disease. However, it has been scientists at PHEREC and FMEL with more than 50 years of devoting their attention specifically to Florida mosquito control and the issues of Florida's mosquito control districts. This history of service and attention to building close relationships and integration between research and applied mosquito control is very deep. One might take some solace in the fact that the Florida mosquito control research program, administered by the Florida Department of Agriculture and Consumer Services, was not reduced in this budget cycle. It was funded at the same level of $250,000. This amount has remained the same for nearly 20 years. Many times I have pointed out that this level of funding is clearly inadequate to face the challenges now confronting mosquito control. It would be a mistake to believe, with the 50% reduction in dedicated mosquito control research scientists, that the research budget is adequate to support the needed work. It is not. We are moving in the wrong direction. 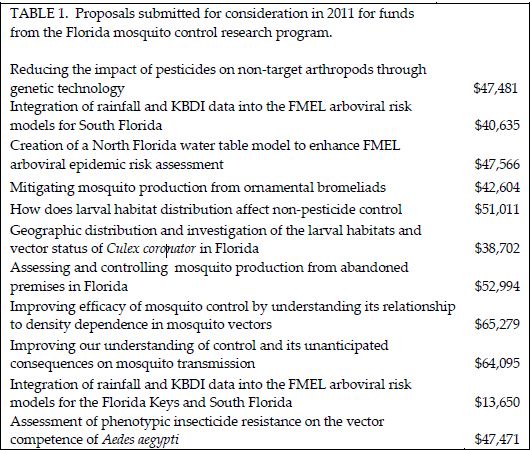 How does one put a price tag on lost opportunities to make progress? What is the cost of not having new information and not having new improved mosquito control strategies? What if we did not know about rotational impoundment management? Arbovirus surveillance? The role of Culex in arbovirus transmission? Bti? Repellants? Trapping? Aedes aegypti? Aedes albopictus? Non- target effects? Pesticide resistance? Consider what Florida might be like with uncontrolled mosquitoes and mosquito-borne diseases. These are the issues that were addressed by the dedicated Florida mosquito control research faculty. What will Florida do when current mosquito pesticides prove ineffective or there are mosquito control failures or pesticides have to be reduced due to perceived untested environmental issues? What of a mosquito-borne disease epidemic? What will be Florida's ability to prevent or stop it? Is it wise to reduce Florida's ability to be effective due to not having essential information? Consider Drs. Mulrennan's and Provost's likely response. Why would Florida's legislators reduce our chance to be successful? That is what is happening. Our chances to be successful have been reduced by 50%. To further illustrate the inadequacy of the current research program consider the projects that were submitted to the Florida mosquito control research program in 2011 shown in Table 1.

Note the 11 submitted projects total a request for $511,500 of which only $250,000 will be supported. This likely means that only 4-5 at best of the submitted projects will be funded. How does one put a price on what is lost by the failure to support some of the other projects? Which ones will not receive support? Realize that each submitted project addresses one or more of the high priority issues identified by the Florida Coordinating Council on Mosquito Control (Table 2). Would Florida benefit from being able to support a few more projects? Perhaps not immediately. However, each and every year more and more information will not be at hand and the number of issues that are not addressed just pile up. How can we hope to have a chance to make progress on the issues identified in Table 2. Are these issues important? Where will the breakthroughs come from if there is no investment? We cannot stand by silently as Florida's mosquito control infrastructure, an investment that took over 50 years to develop, is allowed to erode due to short-sighted decisions. We cannot continue to move in the wrong direction.

Is there any good news for Florida mosquito control and more importantly for the citizens of Florida who have come to rely on mosquito control's ability to protect them from pest mosquitoes and from mosquito-borne diseases? What can we offer our fellow citizens? 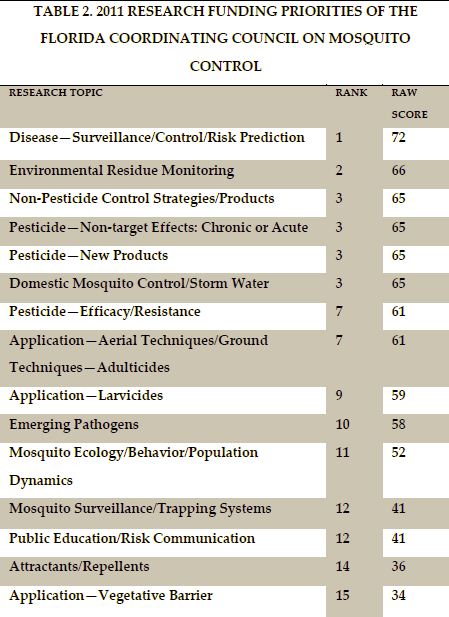 This is not the time when Florida can afford the types and magnitudes of reductions that can only lead to greater numbers of nuisance mosquitoes or to a mosquito-borne disease outbreak. Is Figure 1 what Florida wishes as an advertisement for Florida living? The way to show how important effective, efficient and environmentally proper mosquito control is to all of Florida is through education of Florida's citizens by each and every mosquito control professional in Florida, and then most importantly JOIN, PARTICIPATE AND SUPPORT FMCA! It is vital to Florida's future. 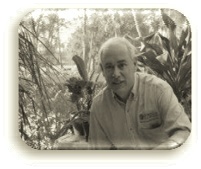