In January 2004 I had the great fortune of giving an invited paper on West Nile Entomological and Surveillance issues at the Istituto Zooprofilattico Sperimentale dell'Abruzzo e del Molise "G. Caporale" or IZS in Teramo Italy. Aside from the great cuisine, I also benefited from the discussions with IZS scientists on their views of West Nile and surveillance.

Italy had an outbreak of West Nile in horses in the Tuscany region in 1998 with 14 infected horses. A serosurvey after the outbreak found ca. 40% of the horses infected in this region. The Italian veterinary and public health agencies are worried that Italy could experience more problems from West Nile. IZS is interested in a sentinel chicken surveillance program to detect the presence of West Nile virus. So far the strains of WN found in Italy are the typical WN virus strains in that these do not kill birds, making WN dead bird surveillance useless for detection. IZS is considering using chicken sentinels, placing flocks in 15 high risk zones where migratory birds are common. Each zone of ca. 400 Km2 will contain 2 flocks of 10 birds each and each will be surrounded by 8 similar 400 Km2 blocks containing 2 similar flocks in each. This represents a total of 2700 birds, each bled and tested every 15 days. The program is under reconsideration after our discussions on the differences between detection and surveillance. Indeed the objective of the Italian program from a veterinary institute like IZS is to detect West Nile quickly and provide surveillance for the risk to horses. This is a difficult and likely an impossible challenge. Could any chicken surveillance program do better than horses? It does raise many of the issues that we in Florida have been discussing since 1999.

What makes a good sentinel for surveillance? First the sentinel has to be an animal that is bitten by large numbers of vector mosquitoes. This also means placing the host in the right location. There should be many sentinels, and the best sentinel is a host that one does not have to bleed. This is the reason horses are a wonderful sentinel. Clinical signs of infection will be reported, and positive horses can be seen and bled to confirm infection. Non-clinical horses are ignored. The equivalent would be very smart chickens that wave a flag and say "look here I am I'm infected". So think about a sentinel chicken program in Italy that could possibly compete with a detection program using thousands of Italy's horses. The IZS scientists are rethinking their plans.

This discussion provides an important view on why the Florida program works, why it is a gauge of human risk, and what makes a smart chicken. I ran into one smart chicken, in the unlikely place of the Reptile Gardens (a tourist stop) in Rapid City, South Dakota. This chicken was kept behind a glass window, and for 25 cents you could play the chicken in a game of tick tack toe. When you dropped the money into the slot you made the first move, the chicken then walked over and pressed a square for an O. I kid you not--one smart chicken. When my sister-in-law lost her game to the "Chicken Brain", my nephews said "let's get Walter to play the chicken, Walter's pretty smart". This chicken got a treat to eat each time it made a move--I did not get anything except that my reputation was on the line. One smart chicken. I'll tell you the outcome later. 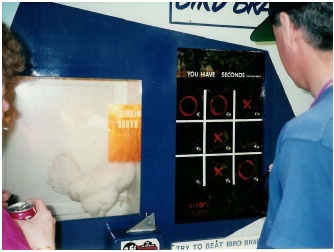 Florida's sentinel chickens are pretty smart as well. As far as West Nile virus is concerned I would say that when correctly placed, our chickens can be on the order of 1000 times better at getting West Nile than a human. That is the power of a properly focused sentinel surveillance program, and I would advise that all Districts use similar analyses in gauging human risk. Let's consider that on average each bird receives 1000 bites a week during a particular period. Indian River MCD runs 8 flocks of 6 birds each, or 48 birds weekly so the birds on average receive 48,000 bites a week. If mosquito transmission frequency for West Nile is 1 in 10000, this means ca. 5 birds will seroconvert. What does this mean for ca. 100,000 people living in Indian River? Will we see a human case? Is this the big event? Hardly. What would happen if everyone in Indian River received 10 bites during this same period? Recall that only 1 in 100 human infections result in a case. The sentinels tell us we might have 100 human infections, we might have a human case, but significant human cases would require a higher transmission frequency or more bites averaged per resident. Do the math. If transmission were 1 per 1000 then likely almost all the birds should seroconvert during the week. What would this mean for Indian River County if on average everyone receives 10 bites during this period? There could be 1000 humans infected with ca. 10 cases. What would happen if the sentinels received more bites, the transmission frequency was higher, a certain number of people behave like horses and receive 100's or 1000's of bites, and/or on average all humans in the county received more bites? Then the risk goes up, and we could be approaching the big event. This is why the sentinel data is an important critical gauge for human risk.

The estimation of the risk to humans is dependent on the size of the human population, the numbers of bites they receive, the number of sentinel birds and their placement. Consider New York City's experience in 2000 when a single sentinel chicken flock was placed on Staten Island for West Nile surveillance. We still hear how sentinel chickens failed to detect West Nile virus in parts of the U.S. Were these just dumb chickens? With only one flock among ca. 400,000 Staten Islanders, humans were the sentinels for the chickens in 2000! Although the Indian River sentinel chicken program would have been more useful for Staten Island, realize that one would need a larger sentinel chicken surveillance program to gauge human risk in Staten Island and certainly for the 10 million people or so in the New York metropolitan area. Do the math.

Florida has a smart sentinel chicken program. Pay attention to the information.

Yes I did beat the chicken. I was worried though. The figure shows Bird Brain's last move and you can see that my strategy worked. Bird Brain did block me on top row leaving me to finish it off on the diagonal. Whew! I know that two knowledgeable players can only play to a draw in tick tack toe. This point was made in the movie War Games when Matthew Broderick teaches a computer that you just cannot win some games. I quit playing while I was ahead and my reputation with my in laws intact. Bring on the Florida chickens.