Is it Culex tarsalis or Culex coronator?

Are you seeing Culex mosquitoes with banded legs in your collections? For mosquito identifiers in Florida who use the Darsie and Morris (2000) keys to the Florida mosquitoes, Culex (excluding the Melanoconion) with distinct or narrow basal and apical bands on the hind tarsomeres will key out to bahamensis or tarsalis. Culex bahamensis has very narrow bands on the hindtarsomeres, a broad median white band on the proboscis, and its distribution is limited to Broward, Dade, and Monroe counties in the United States (Breeland 1982). Culex tarsalis has distinct basal and apical banding on the hind tarsomeres and a broad median white band on the proboscis. For the banded legged Culex then, many identification specialists are keying their specimens to Cx. tarsalis.. While Cx. tarsalis. has been reported from several counties in Florida, it is not common or abundant statewide. For those who have recently identified mosquitoes as Cx. tarsalis., please be aware that these specimens are likely Cx. coronator.

The first collections of Culex coronator in Florida were from Okaloosa, Santa Rosa, Walton, and Washington counties (Smith et al. 2006) and more recently this mosquito has been found in other counties in the Panhandle region. The Georgia Mosquito Control Association website includes a posting of the distribution of mosquito species in the state: http://www.gamosquito.org/resources/mosspecies.htm Culex coronator has been collected in several South Georgia counties: http://www.gamosquito.org/resources/maps/coronator.jpg

Within the past year, the Florida Medical Entomology Laboratory (FMEL) has received specimens identified as Cx. tarsalis. from several mosquito control biologists from Florida counties. However, after examination, we have confirmed the identity as Culex coronator from Citrus, Indian River, Polk, St. Johns, and Volusia counties (Fig. 2). The reason for the misidentification is that these two species have similar morphology and Cx. coronator is not included in the Darsie and Morris keys to the mosquitoes of Florida (2000), but Cx. tarsalis. is described in the key. If a specimen is indeed Cx. coronator, following the Darsie and Morris key (2000) will take the identifier to Cx. tarsalis. and then the identifier may assume that the scales on the proboscis have been rubbed since the band is incomplete. While this may be possible, for recent collections it is more likely that the specimen is Cx. coronator. For the taxonomic key that includes both species, refer to Darsie and Ward keys to the mosquitoes of North America (2005).

The table below provides a list of characteristics, most of which are not included in the Darsie and Morris (2000) key. The information presented here is a combination of characters from Darsie and Ward (2005), Darsie and Morris (2000), and Carpenter and LaCasse (1955). A close examination of the proboscis of Cx. coronator will reveal a broad area of pale or white scales on the ventral surface which does not extend around the dorsal surface to form a complete band; but there is a band of white scales around the proboscis of Cx. tarsalis. (Fig. 1).

If you have specimens that you believe are either Cx. coronator or Cx. tarsalis., and you would like to have a confirmation on the identification, you may send them to FMEL to Dr. Eva Buckner, 200 9th Street SE, Vero Beach, FL 32962. If you have already determined that Cx. coronator is in your county and it is NOT on the map in this article (Fig. 2), please contact Dr. Buckner at eva.buckner@ufl.edu. 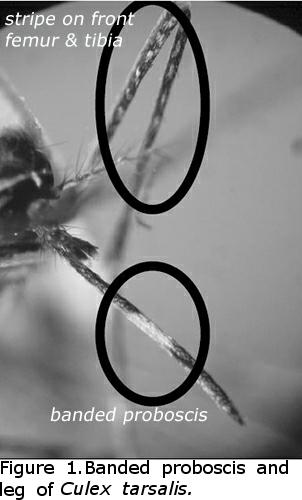