Is West Nile Virus a Threat to Florida? Reasons for Concern

The 2007 West Nile season is underway in the U.S. As of August 9, 2007 there were a total of 308 West Nile cases in the U.S. reported to the CDC. Already there are predictions, based on comparisons to cases in previous years, about the U.S. West Nile forecast for 2007 (see NY Times July 26, 2007 with prediction from Dr. Lyle Peterson, U.S. Centers for Disease Control). Will it be a high West Nile transmission year? The number of cases reported so far in 2007 for the U.S. is ahead of what had been reported during the 2006 season last year at this time. As of August 10, 2007, Florida had a single reported West Nile human case that was unfortunately someone who had died from the disease.

Why has Florida so far been spared the brunt of a major West Nile outbreak? Readers of BuzzWords should be able to address this question. The reasons why Florida has been spared a "big event" have been discussed on many occasions in previous BuzzWords columns. Several different factors must come together in the proper sequence and timing for Florida's vector mosquitoes to amplify sufficient West Nile virus in the bird and mosquito populations. It is only after these specific environmental conditions result in rapid and efficient viral amplification that high enough mosquito infection rates are realized allowing the spill-over of virus to human and horse populations. BuzzWords has previously discussed the importance of winter drought followed by a specific pattern of wetting and drying in the spring and early summer and how these specific environmental conditions drive bird and mosquito populations into contact and maximize the probability of efficient amplification of West Nile virus. Thankfully, so far in Florida these specific environmental conditions have failed to materialize and create a situation of a widespread viral amplification and epidemic transmission in Florida. Florida has reported focal transmission of WNV in Coconut Grove, Dade County in 2004 and Pinellas County in 2005, but so far has been spared West Nile virus epidemics on the scale reported in Illinois, North Dakota, South Dakota, Nebraska, Colorado, Arizona, California, and Idaho. The current forecast, thankfully, is that Florida will again be spared a major West Nile epidemic in 2007. Based on previous experience, counties throughout the state must remain vigilant to prevent or mitigate against focal outbreaks through information to the public on risk and risk prevention, and efficient, effective and environmentally proper mosquito control.

One only needs to consider the current reports of West Nile virus transmission reported in the rest of the U.S. to illustrate the danger from this virus. Though so far in 2007 there have been 308 human cases in the entire U.S., this figure is better appreciated if one considers the incidence of West Nile virus transmission in selected areas where it is clear that the risk for disease is quite high. For example California has 64 cases to date reported to CDC, while South Dakota has had 46 cases. South Dakota? One might ask "so what?" After all, it is only 46 cases. I know a little about South Dakota because my wife is from South Dakota and my wife's family still live in South Dakota where we visited them every year. There are ca. 776,000 South Dakotans. With 46 West Nile cases as of August 9, 2007, South Dakota has one of the highest West Nile incidences of any state in the U.S. so far this year (actually at this time only North Dakota is slightly higher--not good for the Dakota's). South Dakota is about on track with the number of West Nile cases reported this time last year though in the end more cases were ultimately reported.

It is this incidence of West Nile in the South Dakota population that should draw your attention. In the attached graph I use South Dakota's incidence of 0.592 per 100,000 people to draw your attention to what the number of cases might be in some other states, if these states had the same incidence i.e., the same West Nile transmission rate to humans. The number of cases in the example is appalling, and this is only early August. California would already have ca. 2200 cases, and Florida with 19 million people would have ca. 1150 cases if we were to experience the same transmission rate that is currently reported in South Dakota. If you think Florida's past arboviral epidemics have been bad, consider the prospect of Florida being in South Dakota's present position. This would be the major epidemic, the "big event" in Florida that concerns all of us. Under these conditions, most counties would already be under a Medical Alert and there is little doubt that some counties would be considering issuing a Medical Emergency. And it is only early August. So if you think 2007 might be a bad West Nile year in the U.S., think of South Dakota and North Dakota, where it is already a bad year for West Nile.

Incidentally, my 18 year old nephew who lives in South Dakota had West Nile in 2006. He told me that it was not pleasant at all and he was very sick. Fortunately he has fully recovered. He was one of 173 West Nile cases that year in South Dakota, bringing the total number of South Dakotan human cases to 1469 between 2000-2006. This translates to ca. 36,000 cases if the incidence was the same for Florida! 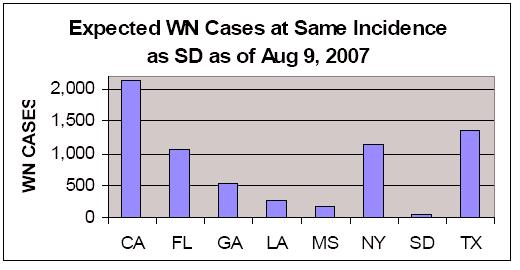