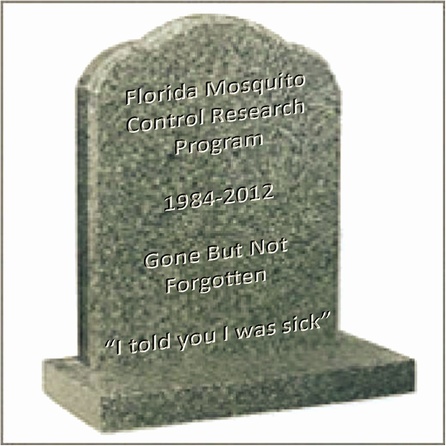 The Florida Mosquito Control Research Program (FMCRP) succumbed after a valiant battle against attempts to reduce the program. In the final hours of the Florida legislative cycle of 2012 the program succumbed after Florida Gov. Scott vetoed the funds that had been used to sustain the program. The FMCRP faithfully served Florida Mosquito Control for more than 25 years during which time it provided essential information that improved Florida mosquito control and Florida's ability to effectively combat mosquito-borne diseases throughout the state. The program was managed by the Florida Department of Agriculture and Consumer Services using dedicated funds of $250,000 annually from the Florida waste tire tax.

The FMCRP used the funds to support specific selected research projects that benefitted the entire state of Florida. The supported projects are testimony to the importance of the program to the state demonstrating their impact on Florida's public health and well-being. For example consider the importance of the information that was provided on the biology of the primary Florida mosquito vectors of West Nile virus, St. Louis encephalitis virus and Eastern equine encephalitis virus. This information has been the basis of Florida's ability to reduce populations of these dangerous mosquitoes. Information provided by FMCRP supported projects on new pesticide products, new strategies to mitigate mosquito populations while reducing the impact of mosquito control practices on the environment and on non-target organisms and new biocontrol methods. The FMCRP provided the information that was the basis of Florida's sentinel chicken surveillance system, through environmental monitoring, risk assessment, and arboviral transmission risk prediction. This system is the envy of other states and has successfully been Florida's first line of defense against mosquito-borne disease like West Nile.

The demise of the FMCRP is a disaster for Florida! Florida's deliberative body for mosquito control is the Florida Coordinating Council on Mosquito Control (FCCMC). Each year this Council, consisting of representatives of Florida state agencies including the Department of Agriculture and Consumer Services, Department of Health, Department of Environmental Protection, Fish and Wildlife, several environmental groups, USDA, Florida Mosquito Control and Florida's state universities, recommended the high priority needs for information to improve mosquito control. These needs were then used by an independent research selection committee consisting of scientific experts to evaluate projects being considered for support to ensure that projects were providing the most important, high priority information while also being scientifically sound. With the demise of the FMCRP, for the first time in more than 25 years, there are no new projects to improve Florida mosquito control, to make it more efficient, effective and environmentally proper. Of equal concern, for the first time there will not even be a discussion in Florida about the needs for new information and research to make Florida mosquito control better. Consider that for the first time Florida will not solicit proposals for support and as a result new ideas that might benefit the state will not be heard or discussed!

At the most recent meeting of the FCCMC several important issues were discussed and the conclusion was that more research was needed to address these issues. At other FCCMC meetings similar conclusions were voiced for more research to get useful information on: 1) The impact of aerial applications on the environment and on nontarget organisms on state managed lands; 2) Mosquito control strategies that will be effective to mitigate a Florida dengue outbreak; 3) Information to allow targeting Ae. aegypti and Ae. albopictus in different regions of Florida; 4) Information that will improve surveillance programs for West Nile, St. Louis, Eastern, dengue, and for exotic viruses, like chikungunya virus; 5) Information about new pesticide products and how to apply them, and new biocontrol strategies and their effectiveness in Florida. More research is needed! The demise of the FMCRP means that there is little chance that this information will be forthcoming for Florida, and little chance there will be legitimate discussion about new ideas to obtain this information. The FMCRP represented the means to obtain essential information that benefitted the entire state, not just a region of Florida, or a few select mosquito control districts. The FMCRP was for all of Florida.

Many people in Florida spent long hours working hard to use the FMCRP for Florida's benefit. All of the research faculty who provided the information for mosquito control over the years deserve Florida's deep appreciation.

The FMCRP is gone. RIP. Mark this moment. The impact on Florida, though not immediately apparent, will be catastrophic. Consider the effects on the U. S. were the NIH, NSF or USDA subject to the same fate. No new research, no new developments, no new technology. Only a true Luddite would find this appealing. How does one put a price tag on the absence of information and new development to keep mosquito control and public health effective? How does one put a price tag on the inability of Florida to prevent a dengue epidemic somewhere in the state five years from now because information that could have been available from a research project was never obtained! What of a West Nile outbreak in Florida of the magnitude of the 2012 eastern Texas West Nile outbreak, with thousands of cases? A similar event in Florida would be a public health, mosquito control, public relations, and financial disaster. Where does Florida expect this information to come from? Perhaps some individual agencies or mosquito control districts will be able to support a few select projects. However this means the loss of statewide consideration of the priority of the issue, loss of the statewide review process to ensure scientific credibility of projects, and the loss of a statewide impact for these projects.

professionals have to make this clear to Florida's legislators who control Florida's budget. The health and welfare of all of Florida is at stake. FMCRP obituary, continued!