With the advent of the recent scares of anthrax in mail and subsequent closing of post-offices and other buildings, the technique of polymerase chain reaction (PCR) has gained public attention. Mosquito-borne disease specialists routinely use PCR to detect small amounts of viruses like West Nile virus and St. Louis encephalitis virus. One might ask how PCR can detect biological reagents when only small amounts are available. A good analogy for how is that PCR allows you to look for that needle in a haystack. If, for example, one spore of anthrax or a single West Nile virus is in a sample, PCR is sensitive enough to detect them. Here I will discuss PCR and provide an example of how this extremely sensitive method is employed.

The PCR technique was invented in 1985 by Kary B. Mullis (Saiki et al,. 1985; Mullis and Faloona, 1987), a scientist working at a biotechnology firm called Cetus Corporation. His discovery allowed scientists to make a million copies of a scarce sample of DNA and revolutionized the diagnosis of genetic defects, the detection of the AIDS virus in human cells, and criminology, by allowing a link to be made between a specific person and trace samples of blood or hair left at a crime scene. This technique has also been used to detect trace amounts of biological signatures of viruses, spores and bacteria. 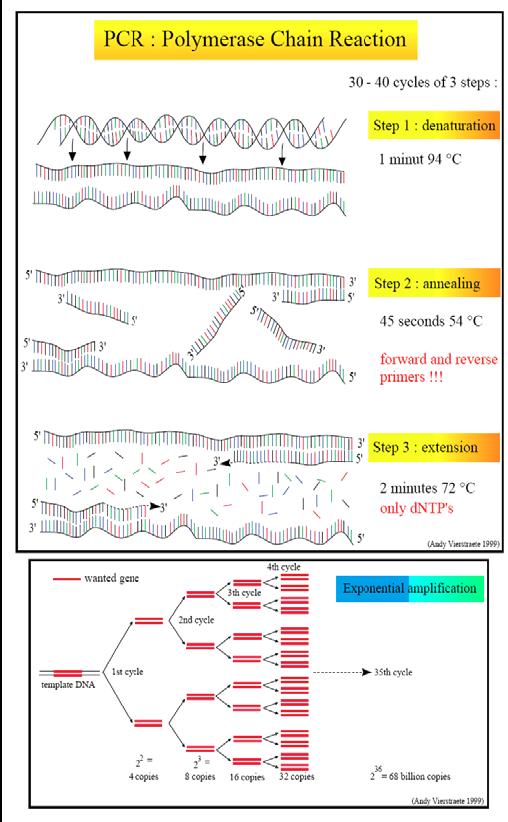 Almost any DNA sample can be used in a PCR reaction, including DNA samples over 7000 years old. Additionally, PCR may be sensitive enough to detect and amplify trace amounts of the DNA target, corresponding to one molecule. Unfortunately, when very small amounts of DNA are used, contamination of the PCR reaction can become a major problem. Contamination may come from a variety of sources, including the researcher who is performing the experiment, the tubes that are being used to set up the reaction and even the enzymes and buffers used in the reaction itself. To reduce the likelihood of contaminating sequences interfering with the desired amplification, a PCR experiment should have between 0.1 and 1 microgram of genomic DNA (note 1000 micrograms equal 1 gram). How many copies of the target DNA does this amount to? Approximately 144,000 molecules of your target sequence.

The PCR reaction consists of three stages each performed at a different temperature: Denaturation, Annealing, and Extension (Fig. 1). The target DNA is first extracted from the trace sample into a test tube. Then the test tube is heated to a high temperature causing the separation of the two strands of the target DNA molecule. This step is called Denaturation. Next the oligonucleotide primers, along with other components that are needed to complete the actual PCR reaction, are added to the test tube containing the denatured DNA. The two target strands are allowed to cool in the presence of the primers. The primers are specific for and bind to opposite ends of the specific target DNA segment of interest at a specific temperature that is related to the length and sequence of the primer. The binding of the primers is called annealing. An enzyme, DNA polymerase, which functions like a crane that lifts cement blocks into the frame of a building, is added to the test tube. The DNA polymerase binds to the free ends of the primers and adds free nucleotides, similar to the cement blocks, in a sequence specific manner, and makes new DNA strands. This step is called Extension and is carried out at a higher temperature than the annealing temperature. Successive rounds of new DNA strand generation follows by continuing to increase and decrease the temperature for more rounds of denaturation, annealing and extension. At the end of each round the number of DNA molecules doubles so that with 30 -40 rounds you have many millions of copies of the target DNA. Because of the specific nature of the PCR design, a positive PCR experiment should generate a product of a specific size. Depending on what answers were being sought using PCR, the presence or absence of a band could be the difference between exposure to a biological weapon or not. Unfortunately, because of the sensitivity of the PCR reaction, there are many steps where contaminants can be introduced, confounding the findings and making analysis inconclusive.

Certainly PCR has revolutionized our ability to detect microorganisms like many mosquito-borne pathogens. It has also revolutionized the detection of biological weapons.

Biological weapons, also called the third weapon of mass destruction, have been around since the Middle Ages when soldiers catapulted the bodies of dead smallpox victims over fortress walls in the hope of infecting their enemies. Biological agents, for the most part, are easily manufactured, transported and dispensed. Of concern is the lag time between a biological attack and the appearance of the symptoms in those exposed to the biological agent. Because many biological agents are contagious, this lag time could provide time for an infected person to spread the disease. To address this growing concern many laboratories are working together to increase our capabilities to detect and respond to an attack by biological weapons. Using state of the art bio-detector technology, a portable PCR machine that is fully automated for real time sample collection has been developed. Because of its small size and efficiency, this PCR machine permits identification of biological organisms within minutes even when concentrations are low.