Sentinel Chicken Surveillance: Some Pitfalls in Analyzing the Data

Florida mosquito control organizations, the Florida Department of Health, and the Florida Department of Agriculture and Consumer Services rely on the information provided by Florida's sentinel chicken surveillance programs. The data from the sentinel flocks are perhaps our best line of defense against West Nile virus (WNV) and St. Louis encephalitis virus (SLEV) transmission in Florida.

The most important point to realize is that our sentinel chickens provide information based on seroconversions to eastern equine encephalitis virus (EEEV), SLEV, and WNV. Chickens produce antibody ca. 14 days after infection. A seropositive chicken was therefore infected ca. 2 weeks prior to the detection of antibody. During this two week antibody "incubation" period, the chicken is essentially out of the information loop. Therefore, these antibody-positive sentinel chickens are positive for 2 weeks prior to antibody detection, but do not provide any useful surveillance data. The positive chicken is effectively dead as far as its sentinel surveillance usefulness once it is infected and before it produces detectable levels of antibody. This fact must be understood to thoroughly appreciate the sequence of events associated with sentinel chicken surveillance. Furthermore, an understanding of these events may help jurisdictions reduce the number of sentinel chicken sera they analyzed and help to reduce the cost of these surveillance programs.

Let's assess the impact of this delay in antibody production on sentinel chicken surveillance programs. Consider a flock of 10 sentinel chickens that are bled once a week. During week 1, two of the chickens are reported as antibody-positive and they are replaced with two uninfected chickens. During week 2, two additional sentinel chickens are reported as antibody-positive. One might believe the seroconversion rate for both weeks was the same--20% (2/10 positive sentinels). This, however, is incorrect because during the second week there were only 8 susceptible chickens in the flock since two are replacements that could not show detectable antibody. Therefore, the actual seroconversion rate for the second week is 2/8 or 25%. Failure to recognize the fact that sentinel chickens require ca. 2 weeks to seroconvert, and once they do are no longer effective sentinels, can seriously underestimate the actual weekly seroconversion rate, because the denominator used to calculate the rate is reduced directly by previous seroconversions.

Let's consider another example. One seropositive sentinel chicken is reported in a flock of six birds. This positive sentinel is removed from the flock and replaced with a seronegative sentinel. It is important to remember that even if this new sentinel is bitten by an infected mosquito on the first night it is placed into the flock, it will not be detected as positive for two weeks. Therefore, it is not possible to detect transmission to this chicken for two weeks and it is not necessary to even bleed this bird until the second week after it is placed into the flock. Furthermore, in this example there are really only five susceptible sentinels in this flock following infection of the first bird. Therefore, the number of birds tested during the second week is five, not six. During the second week of sampling, an additional seroconversion will result in a seroconversion rate of 1/5 = 20% and not 1/6 = 17%. Likewise, if two additional sentinels from this flock seroconvert during week 3, the total number of susceptible chickens in the flock is three. The single sentinel added during Week 1 and the two sentinels added during Week 2 have not been in the field long enough to seroconvert. Therefore, the seroconversion rate for this flock during Week 3 is 2/3 = 67% and not 2/6 = 33%. It should be evident that it is essential to accurately track the true number of susceptible birds in each and every sentinel flock. Failure to track the number of susceptible sentinel chickens in a flock will significantly change the denominator used to calculate the flock-specific seroconversion rate, and may have a profound effect on data interpretation, especially when there are substantial seroconversions. 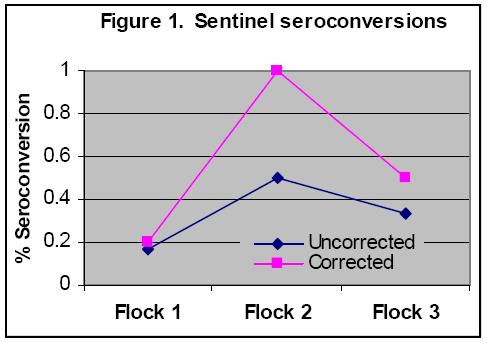 Figure 1 shows the difference in seroconversion rates in three sentinel flocks during a two week period based on the seroconversion reports shown in Table 1. Note the profound effects in the seroconversion rate for Flock 2 where 3/6 birds seroconverted during Week 1. Therefore, the number of susceptible sentinels in Flock 2 during Week 2 will be three, not 6. Also note that by carefully tracking the seropositive chickens and by not analyzing sera that have no chance of being antibody-positive, the number of test samples, and cost of the surveillance program can be reduced. In this example, only 12 birds need to be tested during Week 2, not all 18. Again, it is important to track the seroconversion status of individual chickens and to remember that there will be a 2-week seroconversion lag for infected birds. As an extreme example, consider the possibility that an entire flock of six sentinels is infected on the same night. These chickens will remain in the flock for at least two more weeks until they seroconvert. The replacement birds will not provide data for another two weeks, even if they are infected on the first night they are placed into the field. This flock will not provide any meaningful surveillance data for at least a month following the first round of transmission highlighting the importance of early-season transmission data in forecasting potential epidemic situations.

It is, of course, always interesting to review real-life situations. Pinellas County sentinel chicken surveillance during 2005 indicated the possibility of significant levels of WNV transmission in the southern part of the county. The number of sentinel chicken seroconversions reported in Pinellas County for the weeks of 7/5, 7/11, 7/25, and 8/1/2005 were 3, 7, 12, and 7 respectively. The overall seroconversion rate for Pinellas' 56 birds was 5, 12.5, 21, and 12.5% respectively. However, if the total number of sentinels is corrected for the presence of susceptible chickens, then the real seroconversion rates are 5, 13, 26, and 19%, respectively. This effect is even more pronounced if we focus only on the three flocks in southern Pinellas County where WNV transmission was focused.

The important message here is to keep track of the weekly status of sentinel chickens. Remember, there is a two week lag between the time the chicken is infected and the time that antibody becomes detectable. One way to reduce the impact of this lag, especially during periods of high transmission, is to routinely replace all of the chickens in flocks located in areas of high transmission and to hold the exposed birds for two weeks to assess seroconversion rates. In this way you would maintain the full complement of susceptible sentinels each week, despite the extensive levels of transmission. Instances when this extreme level of sentinel chicken surveillance is necessary would be extremely rare. We know that early season (June and July) arboviral transmission to sentinel chickens is far more indicative of potential epidemic transmission than is late season arboviral transmission to sentinel chickens. Having a full component of susceptible sentinels in the field during these two months is critical to forecasting arboviral epidemics. The weekly, or biweekly, cycling of selected flocks would provide accurate transmission information for each week.

We have urged districts to consider using an ARDS strategy in selected areas of their counties to accurately assess the spatio-temporal distribution of high levels of early season arboviral transmission (Tabachnick et. al. 2005. Buzzwords 5(2): 6). The ARDS surveillance strategy, implemented only during very selected times in very selected places, reduces the negative impact of keeping chickens that have seroconverted and are non-susceptible as part of the exposed flocks. Just some food for thought.