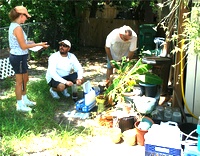 counties to determine the effects of container type, environmental conditions, neighborhood type, and geographic location upon mosquito productivity. In each county, one site has abundant surrounding vegetation, and the other a more urban character and little vegetation. Types of containers encountered are being catalogued and classified based upon the pooled results from all sites. Differences between counties, neighborhoods within counties and container types within neighborhoods for the various mosquito species will be explored, and effects that are not significant within the above blocks will be examined across blocks by conducting separate analyses with pooled data.

Worldwide, the use of pesticides has increased more than ten-fold since the 1950s (Driesche and Bellows 1996). Many pesticides have been effective in controlling the target pests, but there are problems associated with their widespread use including pest control failures, development of insecticide resistance, elimination of populations of beneficial organisms, contamination of the environment, damage to human health, and often very high costs. Although pesticides will be with us for the foreseeable future, an integrated approach to pest management is now considered essential, particularly in view of the challenges facing future generations in terms of human health and the world's food and energy supplies. Biological control is a fundamental part of integrated pest management programs.

We are currently examining the effectiveness of two species of copepods for mosquito control in natural and developed habitats using containers known to be mosquito producers. We are assessing actual mosquito control under realistic field conditions, as well as the ability of the copepods to maintain active populations under such conditions.

Aedes aegypti and Aedes albopictus are widely distributed and highly adaptable mosquito species that occur in a large variety of natural and artificial containers. These species are major potential vectors of

dengue and Chikungunya. We have little information on possible interactions between these species that may influence oviposition behavior and site selection, both of which may be important in determining distribution patterns of the species. We are currently examining the effects of conspecifics and congeners, and of the locale in the immediate vicinity (≈1 meter) of potential oviposition sites upon oviposition by Ae. aegypti and Ae. albopictus under simulated field conditions.

Dibrom® (naled) (AMVAC, Inc.) is an organophosphate used in the aerial mosquito control programs of many of the Florida mosquito control districts. The target of Naled applications is the adult mosquito, however, because it is not a selective insecticide, there is the potential that non-target organisms will encounter the spray droplets and be harmed. In support of the research priorities developed by the Florida Coordinating Council on Mosquito Control, we are examining broad effects of application of Naled on the terrestrial arthropod fauna under real-time operational applications, including identification of particularly susceptible taxa, if any, that can serve as indicator species for future tests and developing a data baseline for more intensive field studies on pesticide effects on non-target species.